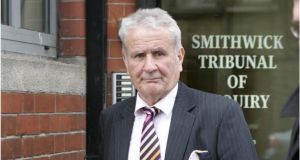 Former Garda detective sergeant Owen Corrigan has completely rejected the findings of the Smithwick Tribunal that concluded he had an inappropriate relationship with and supplied information to the Provisional IRA.

Now retired, having been formerly based at Dundalk station, he said any dealings he had with the paramilitary organisation were for the purposes of gathering intelligence and protecting the State.