A minor can bring a personal injury action through their parent or guardian. Any settlement must be approved by the legal team and the court. The compensation is retained by the Court’s Accountant’s Office for the child until they reach the age of 18 at which point the child can request the funds be released to them.

The following cases are examples of cases in which Lawlor Kiernan LLP has represented a minor.

We acted for a minor who sustained serious facial scarring injuries when hit by a passing vehicle. The vehicle did not stop. The case settled to the satisfaction of the child’s parents and the settlement was accepted by the court.

We represented a baby who sustained significant scaling and scarring injury to her foot in hospital. The baby was four days old and was being sent for a heel prick test. In order to see the veins in the baby’s foot, the midwife intended to place the baby’s foot in lukewarm water. However, she failed to check the temperature of the water and placed the baby’s foot in hot water. The baby suffered very bad burn / scaling injuries and was treated in hospital for a further 10 days. The hospital accepted responsibility for the injury, and we ensured the baby was compensated for the injury and residual scarring. The baby’s parents and the court were satisfied with the settlement. The hospital also settled the baby’s mother’s claim for nervous shock arising out of the same incident.

We acted for a 12-year-old child that sustained injuries when the car she was travelling in was rear-ended by another vehicle. She suffered injuries to her neck and back. She also suffered with nightmares following the accident and was nervous when travelling in a car. A medical report was obtained from her GP in relation to her injuries. The case settled before the hearing date and the child received compensation.

We acted for a 2-year-old child who had suffered an injury to his head due to a trip and fall on the pavement outside his house. The pavement had become cracked and uneven because of the roots of he trees the council had planted. The infant suffered a cut to his forehead requiring a number of stitches and he was left with a scar on his forehead after the wound had healed. The case was fully defended by the local council that had planted the trees. We obtained an engineer’s report which confirmed that the council had repaired other parts of the footpath in the same housing estate but had failed to repair this section. The council was found responsible for the injuries and our infant client was awarded compensation.

We represented a teenager who had been on a swing in a public playground. The swing was old and in a bad state of repair which caused one of the chains to snap while our client was on it. She fell to the ground and broke her ankle. The case settled before the hearing date and our client was also awarded her costs of bringing the proceedings.

We acted for a minor who slipped and fell in her home and presented to A&E with a shoulder/clavicle injury to her right side. She was sent for x-rays for further investigation. Unbeknownst to our client, the radiographer incorrectly x-rayed the left shoulder. No abnormality was detected, and no further action taken. The error was only detected several months later because our client continued to complain of pain in her shoulder.

We represented a minor who was crossing the road when she was knocked to the ground by a speeding vehicle. The collision caused a serious fracture to our client’s leg which required wiring to be inserted around her bone. She had to wear a cast for almost two months subsequently. Because the speeding driver was uninsured at the time of the accident, we brought a claim against the uninsured driver as well as the Motor Insurers Bureau of Ireland.

We acted for a minor who was shopping in a sportwear shop with his mum when he leaned in towards a display unit to have a closer look at “Minion Crocs”. As he was doing so, his eye socket got caught on a hardly visible nail-like bar that was sticking out from the display unit. The bar lacerated his right eye socket, tearing it halfway off. The matter is ongoing and due to be ruled by the Court shortly.

Guide to Filing Child Injury Cases Legally, a person under 18 years is considered a minor and cannot engage a child personal…

Child Personal Injury Claim Steps However, the main concern for parents is always the health and welfare of their children… 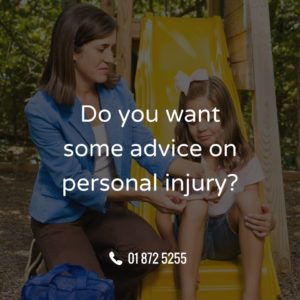 Child Personal Injury Solicitor; Guide to Making a Claim Here is a guide that makes it easy for you to make a reasonable claim…